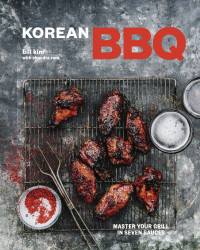 Bill Kim has been on an incredible journey involving food and identity. His family immigrated to the United States when he was a child, he discovered cooking and proceeded to learn everything he could about it, and now he runs several restaurants and is spearheading the elevation of Korean cuisine in the United States. He recently wrote the cookbook "Korean BBQ: Mastering You're Grill in Seven Sauces." Bill Kim will be speaking with us about his journey and the recipes that inspire him.

I'll also be speaking with Nan Devlin, the Director of Tourism for Tillamook Coast Oregon. She is a part of an effort to bring together restaurants, farmers, fisherman to individuals and businesses that create food experiences, all along the Oregon Coast. They will be releasing their map soon. We'll talk about the abundance of exciting Oregon Coast food history and why the North Coast Food Trail is being created.

As always, I'll be speaking with Marisha Auerbach for our monthly garden segment. We are getting close to fully planting out the garden, but the timing is incredibly important. I'll be checking in with Marisha to see what it is we can plant now and what we can be doing to make sure we are ready for a successful season.