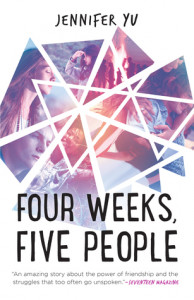 Sarika Mehta welcomes Jennifer Yu to KBOO to discuss her novel Four Weeks Five People...Obsessive-compulsive teen Clarissa wants to get better, if only so her mother will stop asking her if she's okay.  Andrew wants to overcome his eating disorder so he can get back to his band and their dreams of becoming famous.  Film aficionado Ben would rather live in the movies than in reality.  Gorgeous and overly confident Mason thinks everyone is an idiot. And Stella just doesn't want to be back for her second summer of wilderness therapy.  As the five teens get to know one another and work to overcome the various disorders that have affected their lives, they find themselves forming bonds they never thought they would, discovering new truths about themselves and actually looking forward to the future.

"The summer after my freshman year of college, I sat outside a cafeteria in Philadelphia and wrote the first few sentences of a story that would eventually become Four Weeks, Five People. I was 17 years old at the time, and by all the usual metrics of success, I'd done pretty well for myself: in high school, I got A's and competed in speech and debate tournaments. I joined the track team even though my athleticism registered somewhere in the negative percentiles. I graduated at sixteen with admission to an Ivy League university. There, I became an editor at the school newspaper, worked part-time jobs, applied for summer internships, got dinner with my friends on weekends, and managed to turn in my essays before their deadlines 90 percent (OK, maybe 80 percent) of the time.

There was just one small caveat to that list, so simple it almost seems silly to spell out: I wasn't very happy. In fact, I wasn't happy at all: In high school, while one side of me sat in calculus class and wrote letters about boys to my best friend, another side of me looked in the mirror and screamed that I wasn't good enough and that I never would be. In college, while part of me filled my time with meetings and parties and coffee dates, another part couldn't let go of the idea that there would always be someone more competent, friendlier, thinner – just plain better – than me and that I would never live up to the image I was projecting to everyone else.

The only thing that I feared more than not being good enough, it turned out, was other people finding out what I was experiencing. Maybe my old friends would be horribly annoyed that I wouldn't shut up about my feelings. Or maybe my new friends would no longer think of me as the fun, spirited girl they wanted to be around in the first place. Maybe my teachers and coworkers would think that I was less competent and stop taking me seriously as an intellectual. Beset by paralyzing anxiety, I did everything I could to keep my mental health struggles separate from the rest of my life, hoping that in due time, they would simply go away."  -Jennifer Yu