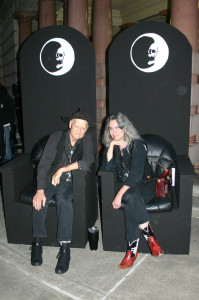 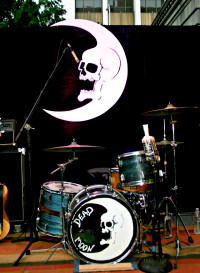 Dead Moon was the best band ever. In 2006, after 19 years, tons of records, tours, and unforgettable nights as performers, or the soundtrack, Dead Moon broke up. We mourned.

Fred Cole wrote his autobiography in the songs, then revisited and revised the autobiography. His basic message to us is that living life on your own terms is a hard path to take,  but there is nothing better. NOTHING.

On October 5th, Portland City Commissioner Chloe Eudaly and an incredible team of people put on Dead Moon Night to commemorate what Fred, Toody, and Andrew had given us for all those years.

There was a full harvest moon above the evening of October 5, 2017 as the inseparable couple peered up to a stage outside Portland City Hall. This was Dead Moon Night, the city’s official commemoration of the legendary band.

This wasn’t a dry City Hall meeting or keys-to-the-city ceremony. This was a live punk rock party outside City Hall in honor of Dead Moon, accompanied by an official proclamation read by Portland City Commissioner and champion of renters’ rights, Chloe Eudaly, deeming October 5 from then on to be marked Dead Moon Night on the city’s calendar.

Months in the making, Dead Moon Night drew 1,100 fans of the band out to 1221 SW 4th Ave to witness an impressive lineup of Portland musicians covering Dead Moon. A candle dripped gradually over the neck of a Jack Daniels bottle throughout the City Hall show, just like so many that had burned onstage when Dead Moon played live over the years. (Kate Kaye)

Update Required To play the media you will need to either update your browser to a recent version or update your Flash plugin.
Topic tags:
Arts/Culture, Music
Genre(s):
Arts and Culture, Live Performance, Punk, Rock and Roll