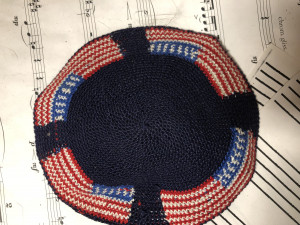 26  Rav Moshe often said that he was the last official Rav in Russia. After the Revolution, the Communists could not openly prohibit rabbanus because it was permitted by the Soviet Constitution, but they imposed a heavy "parasite tax" or "bourgeoisie tax" on rabbanim. In order to avoid the tax, many rabbanim resigned from their official positions, though they would remain in town to serve the needs of the people. Rav Moshe, however, said that this was forbidden under the injunction of יהרג ואל יעבור, which sometimes demands the forfeiture of one's life. Whenever a rabbi resigned from the rabbanus, the Communist newspapers would carry a gloating report that another rabbi had given up his "decadent religion." Rav Moshe refused to resign because it would have amounted to כפירה, or renouncing faith in Hashem and His Torah."

America is a work in progress, a lab experiment that is being tweaked, one variable at a time.  Americans move forward, Americans move back, but we at least have a framework to build freedom from.  I have been to Jewish services where people praised communism, from an affluent, privileged Portlander vantage point.  The same people who would not give me the time of day for being a Tradesman.  We Americans love to romanticize isms while forgetting the ism that bore us in the first place.  Judaism is about moving from 'avdus' to 'cherus', from slavery to freedom (Passover Haggadah).  This does not only mean physical shackles, but mental manacles as well.

Jews have been on the ground here since the very inception of colonialism to the continent.  We came from Europe, Asia, and the Middle East to seek the freedom to practice Judaism while seeking “life, liberty, and the pursuit of happiness” (US Declaration of Independence).  Jews had their share of antisemitism here, but we managed to create a thriving presence.  There is a dichotomy in all the fluff.  Not everyone on the land was able to pursue these ‘unalienable rights.  We must remember the Indigenous Native Peoples who were removed and displaced, the Africans who were brought over on slave ships to build and farm this new country with their own lives and centuries of oppression, and many other groups who were made to live in a marginalized limbo and still fight for the basic ‘unalienable rights’.

The United States does not make Rabbis pay ‘parasite taxes’ like the Soviet Union.  The law proclaims that one may worship as they choose.  The law proclaims that all are created equal under the law.  However, we Americans have a history of not treating everyone with the same accord as a member of whatever group we identify with.  In my life, I have been the one that was not treated as the adult in the room when there was someone that was a bird of a feather to my boss.  I have been the one that did not match up to my peer’s architype of management.  I have been told that because I am dammed for not agreeing with them, I may as well be treated harshly.  Perhaps this interpersonal, communal equity of the unalienable rights is our final frontier.  The Tractate of Bava Metzia 111A notes the difference between oppression and stealing.  Oppression is to keep saying, come back later, and never actually doing anything.  Stealing is more transactional.  Americans do not believe that we tolerate theft, but both sides still allow oppression.  May it be the will of Hakadosh Baruch Hu, that our society seeks truth, justice, and peace.  May we obliterate oppression amongst our nation.  V’imru Amen!!