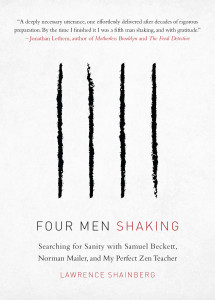 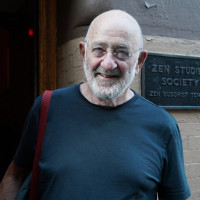 Lawrence is author of the memoir Ambivalent Zen: One Man's Adventures on the Dharma Path, the nonfiction book Brain Surgeon: An Intimate View of His World, and three novels – One on One, Crust, and Memories of Amnesia. His fiction and journalism have appeared in Esquire, Harper’s, Tricycle, and the New York Times Magazine. And he’s won a Pushcart Prize for his monograph on Samuel Beckett, which was published in the Paris Review.

Jonathan Lethem calls Four Men Shaking: “A deeply necessary utterance, one effortlessly delivered after decades of rigorous preparation. By the time I finished it, I was a fifth man shaking, and with gratitude.”

Lawrence will be reading, and signing books, at Powell’s City of Books on Thursday, September 26th at 7:30 PM.

Update Required To play the media you will need to either update your browser to a recent version or update your Flash plugin.
Download audio file
Topic tags:
Arts/Culture, Faith/Religion/Spirituality
Genre(s):
Arts and Culture