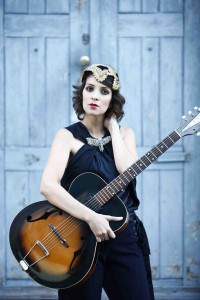 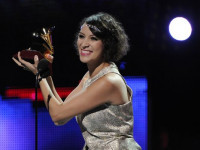 Sarika Mehta hosts a conversation with the Grammy winning singer-songwriter.

Since moving to Los Angeles from her native Guatemala, singer-songwriter Gaby Moreno has achieved remarkable success as a musician. She has been nominated for an Emmy and won a Latin Grammy for Best New Artist. She has released four albums, toured with singers Tracy Chapman, Ani DiFranco, Punch Brothers, Hugh Laurie and Calexico, and has shared the international stage with pop music luminaries such as Bono, Andrea Boccelli and Van Dyke Parks.

In 2006, her song, “Escondidos,” took the top prize in the John Lennon Songwriting Contest, the first contestant in the Latin category to win Song of the Year. (She’s now a judge.) That opened many more doors. Her first album, “Still the Unknown” , produced independently was released in 2008.

Moreno’s career started moving quickly. She co-wrote the theme song of the television series “Parks and Recreation,” which was nominated for an Emmy in 2010. That same year, she recorded the classic song “Smile,” by Charlie Chaplin, for the Oscar-winning documentary “The Cove.” And she performed “Toast to Freedom,” a song commemorating the 50th anniversary of Amnesty International, first with Kris Kristofferson on The Tonight Show with Jay Leno, then in Dublin where she shared the stage with Angelique Kidjo and Bono.

She released her second album, “Illustrated Songs” in 2011, followed by “Postales.” in 2012, her first release entirely in Spanish and with Metamorfosis, the label founded by her compatriot Ricardo Arjona, one of Latin America’s most prominent singer-songwriters. . That year, Moreno and Arjona released a duet, “Fuiste Tu,” which was nominated for Song of the Year and Record of the Year in the 13th Annual Latin Grammy Awards.

Update Required To play the media you will need to either update your browser to a recent version or update your Flash plugin.
Download audio file
Topic tags:
Arts/Culture