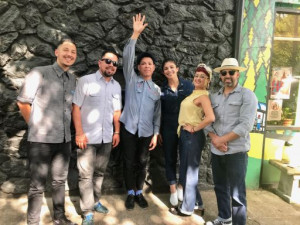 Las Cafeteras, the Chicano band from LA, and what I like to think of as unapologetic political folk music for the soul! They brilliantly mix traditional son jarocho with contemporary issues. Las Cafeteras hail from the Zapatista-inspired EastSide Cafe in East LA. Their first album, It’s Time, treats us to a contemporary take on son jarocho, while their latest album, Tastes Like LA, incorporates more styles and “tastes” of other music.

Last year, on inauguration day, they released the video for If I Was President, which went viral. They’re not just a rock band with an incredible performance and complex musical layers; they’re educators, social workers, academics, and organizers who care deeply about the communities centered in their music. And as son jarocho’s roots are Afro-Mexican, they pay homage to Black Lives Matter including the victims’ names in their lyrics.

While they were giving a workshop at Portland State University, they also joined me in studio at KBOO Community Radio, for thought-provoking conversation and great music