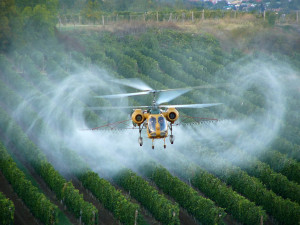 A group in Lincoln County, Oregon, has put a measure on the May ballot that would ban aerial spraying of pesticides and herbicides.

A number of measures in recent years have sought some sort of action against pesticides, herbicides, and genetically modified organisms at the county and city levels in Oregon.

All of them have attracted vast, sometimes record-breaking, amounts of out-of-state money from multinational corporations like Monsanto, Dow, Syngenta, and Con-Agra, as well as local and state farm and forestry groups.

For more on the measure, KBOO reporter Sam Bouman spoke with Rio Davidson, one of the organizers who helped get the measure on the ballot.

Opponents of the measure did not respond to interview requests in time for broadcast.