What Happens to the EPA Now? 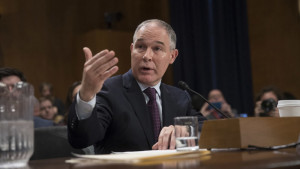 On February 17 the U.S. Senate confirmed Scott Pruitt as the new EPA administrator. This is a man who denies climate change is real. As the attorney general of Oklahoma he sued the EPA fourteen times, while using talking points written by energy lobbyists to publicly attack Obama's Clean Power Plan. Now as head of EPA he's planning to dismantle the very agency he leads.

What will the outlook for energy and climate policy look like under this new administration? On this episode of Locus Focus we talk with Tyson Slocum, Director of Public Citizen's Energy Program, about the damage we can expect and the paths of resistance we can take to slow down the Trump administration's centrifuge of deregulation.

Tyson Slocum is director of Public Citizen's Energy Program, covering climate change, coal, oil, fracking, nuclear energy, renewables and commodity market oversight. Tyson has expertise on federal subsidies for the energy sector and promotes refocusing such incentives away from the nuclear, oil and coal industries toward rooftop solar and wind energy, energy efficiency and mass transit. He also covers federal legislative efforts to address climate change, particularly the impact such programs will have on the ability of moderate- and low-income households to afford access to sustainable energy. Tyson is the author of numerous reports on these subjects and has presented his findings in testimony before the U.S. Congress. He appears regularly in print and on radio and television shows, including on PBS Newshour, The Colbert Report, MSNBC, Fox News and CNBC.

Update Required To play the media you will need to either update your browser to a recent version or update your Flash plugin.
Download audio file
Topic tags:
Environment/Climate, Energy/Natural Resources