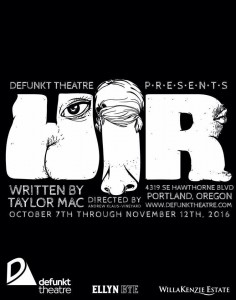 For their 17th season Defunkt Theatre kicks things off with "Hir" by Taylor Mac. Join James Dixon as he welcomes director Andrew Klaus-Vineyard and cast members Jim Vadalla and Paige McKinney as we discuss the show and Defunkt Theatre's upcoming season.

"Klaus-Vineyard and the cast have honored Mac’s play, but kicked it up a notch with their with great attention to making the characters’ internal conflicts seem real. Access is a theme around which much of Taylor Mac’s work revolves. Defunkt lets you in for a while to a version of Mac’s past, through a joy ride of the transformative power of play. "

"You may think you’ve seen just about every variation on the dysfunctional family play...unless you’ve seen “Hir,” the sensational — in all senses of the word — play by Taylor Mac, you cannot consider yourself an authority on this ever-enduring genre of American theater."

Defunkt is thrilled to bring one of the most celebrated and exciting plays of the past ten years to Portland. As Charles Isherwood of the New York Times writes “Perhaps no play this year inspired a greater sense of awe than Taylor Mac’s audacious dive into the dysfunctional-family playpen of American theater.…in his depiction of a semi-mad housewife with a transgender son, another son reeling from three years in combat in Afghanistan, and a husband whose disabling stroke has rendered him nearly speechless….”

Reservations are encouraged as space is limited
For tickets:
visit defunktheatre.com or call 503 974 4938

Saturday, October 29: "Families in Transition:" Join us for a post show discussion with special guest Reid Vanderburgh, author of Transition and Beyond: Observations on Gender Identity

Defunkt’s 2016-17 Season 17: On the Edge is presented with support from Ronni Lacroute/Willakenzie Estate, Ellyn Bye, and the James F and Marion L Miller Foundation.

Update Required To play the media you will need to either update your browser to a recent version or update your Flash plugin.
Download audio file
Topic tags:
Family, Gender, LGBTQ, Military/Veterans, Arts/Culture

Too Much Information with Abe and Traci
Memphis blues