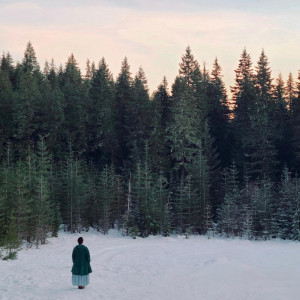 Please join us for Transpositive PDX on Tuesday, April 10th on KBOO Community Radio as we talk with singer-songwriter Siena Christie and listen to the KBOO premiere of Siena's new song ‘Northern Lights,’ a haunting ballad that intricately explores her relationship with her wife, who transitioned in the last year, “Northern Lights is a song I wrote for my partner of 11 years. At the time I wrote it, she was experiencing severe depression and anxiety, from having hid her true identity (as a trans woman) all her life. I felt cold, alone, and helpless watching her suffer. So I wrote the song partly to soothe myself, and partly to show compassion for her, in hopes she too might feel less alone."

Championing human rights and the wellbeing of every community, Siena is a passionate activist and does her utmost to contribute what she can, for example, her song ‘name on a list’, released in 2020 was dedicated to slain human rights activist Zara Alvarez and has raised over half a thousand dollars for human rights in the Philippines and has been featured at numerous online rallies, “I am a strong believer in human rights, and the right of every community to self-determine their own wellbeing. I stand with activists against racism, poverty, queerphobia, and xenophobia all over the world. In the US, this translates to my beliefs in reparations for Black Americans, restructuring our corrupt racist criminal justice system, supporting Land Back efforts, telling LGBTQ kids that they are valid and worthy of love, and engaging in mutual aid to help our neighbors.”

During the second half of the show we will talk with author Sheila Mengert about the backlash specifically focused on trans youth this spring with an onslaught of legislation in over two dozen states specifically targeted at trans kids as well as adults who care for and support trans kids.  We will discuss legislation in Alabama, Florida, Idaho, Iowa and Texas that have made it illegal for trans kids to receive medically appropriate treatment, counseling and support as well as legislation that criminalizes adults who support trans kids through therapy, medical support and parenting.  We will also discuss the ongoing humanitarian crisis in Ukraine and its affect on trans women.

Transpositive is a biweekly program in Portland exploring themes important to those who identify as Transgender, Gender Non-Binary, and Gender Non-Conforming. Transpositive tries to connect listeners with the ongoing activist, arts, culture, and dialogue happening in Portland and beyond. Make your voice heard! Transpositive PDX is open to new and experienced programmers, guests, and events you want our community to know about. We are an open collective. Anyone identify as trans, gender non-binary, gender fluid is welcome to be part of our collective after completing some basic free radio training. For more information contact Emma at transpositivepdx@gmail.com

Update Required To play the media you will need to either update your browser to a recent version or update your Flash plugin.
Download audio file
Topic tags:
Gender, LGBTQ, Civil Rights/Human Rights, Arts/Culture