Hosted by:
IndependentProducer
Produced by:
KBOO
Program::
Between Us 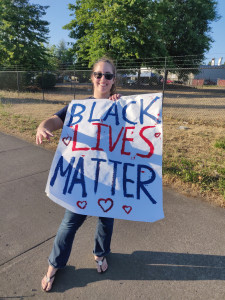 Driving along McLaughlin Ave as I am wont to do, I often see large groups protestors with flags and signs, expressing their First Amendment rights for conservative values and beliefs. But I rarely see "a" protestor, with "a" sign, expressing their First Amendment rights for progressive values because, I think, they are simply intimidated to be out there by themselves. It's easier to be in a school of fish than out there all alone. But some people just have the guts of the star in "Finding Nemo".

I met such a young woman holding a very large, homemade Black Lives Matter sign as traffic buzzed by one recent Saturday evening. I later learned she was Anna Sanger Reed, the Executive Director of the Western Energy Institute in Lake Oswego. I was so struck by the fact that she was out there, by herself, in a community that she admits isn't always friendly to her message, that I just had to talk to her.

The traffic noise is kinda bad, so here is a transcript.