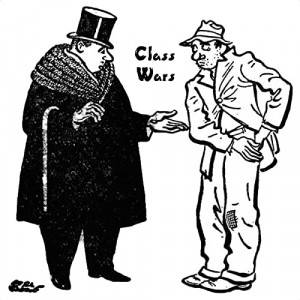 Welcome to ClassWars, the home of Activist Radio, a weekly program for all Americans who are not in the wealthiest one percent of the US population.

Class wars have been going on since the beginning of recorded history. As societies become more powerful and wealthy, they often become more corrupt. Towards the end of each cycle, a few rich families own practically everything and rule with an iron fist. Imperial wars for empire and military over-expansion are other trademarks of a debased and undemocratic society. Empire brings about great poverty and suffering not only in the occupied and exploited lands, but at home as well.

Class wars is a dirty term in our media, which always implies that America is above such crudeness. But the very rich are not above that at all. They have been waging an especially intense attack on working people since the 1970's, and have accumulated immense wealth and power at the expense of the rest of us.

Of course, America's class wars are not fought with tanks and bombs, but with crooked politicians, right wing think tanks and corporate owned media. For the very rich to maintain and increase their share of the national wealth, they have to fool you. How else could one percent of our population call the shots for the other ninety-nine percent?

Well, there is another way. The very rich can bankroll a fascist demagogue who then uses racial fears and hatreds to overcome any form of worker resistance. Mussolini and Hitler are examples of how this was done in the 1930s. Trump is, of course, the most dangerous demagogue of the 21st century. To understand how he has gotten this far, check out: "The Unspoken Spread of Fascism."

Activist Radio will attempt to show you how the few richest of our citizens lie to the rest of us to expand their power and wealth. They are sick with greed, of course. But so far, the rest of us are what might be worse, and that is stupid. None of the information presented is particularly new or really very hard to find, although you won't read it in the mainstream press or see it on TV. If that is what you are relying on for news, you are being suckered, my friend. I don't know how to put it any nicer.

The program is streamed live from: classwars.org. Past programs can also be listened to on the website, or as a podcast. Check out our inside look at the programs: classwars2.blogspot.com.

Indigenous reoccupation site in BC, Canada - The people's resistance to the Coastal Gasoline pipeline. 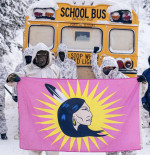 Airs at: Thu, 09/22/2022 at 7:00pm - 8:00pm
Produced for:  Activist Radio
Update Required To play the media you will need to either update your browser to a recent version or update your Flash plugin.
Download audio file
Sleydo (Molly Wickham), spokesperson for the Gidimt'en checkpoint on Wetʼsuwetʼen lands and resident of the Cas Yikh (grizzly house), an Indigenous reoccupation site in the province of British Columbia, Canada, since 2014, talks about her people's resistance to the Coast... END_OF_DOCUMENT_TOKEN_TO_BE_REPLACED

Michael Knox, Professor Emeritus at the University of South Florida, Chair of the US Peace Memorial Foundation, talks about how to end our nation's senseless wars.

Airs at: Fri, 09/16/2022 at 9:00am - 10:00am
Produced for:  Activist Radio
Update Required To play the media you will need to either update your browser to a recent version or update your Flash plugin.
Download audio file
GUEST: Michael Knox, Professor Emeritus at the University of South Florida, Chair of the US Peace Memorial Foundation, and Editor of the US Peace Registry, talks about achieving peace through honoring our nation's peacemakers. worldbeyondwar.org/michael-knox   -- clas... END_OF_DOCUMENT_TOKEN_TO_BE_REPLACED