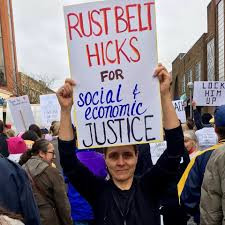 Bill Resnick interviews Dean Hubbs, historian, musicologist and cultural critic at the University of Michigan. Her book Rednecks, Queers, and Country Music examined the progressive currents in country music. Coming from a working union family, she came to critique the prevalent portraits of working people as racist, misogynist, anti-gay, narrow minded and Trump voters, as compared to those who see themselves as tolerant and thoughtful, made of better stuff and thus deserving of privilege and rule. Bill and Dean discuss how that portrait is dead wrong, but continues to inform analyses of politics and particularly who voted for Trump. They conclude with a discussion of the 2020 election and who actually voted for Biden and Trump.

Update Required To play the media you will need to either update your browser to a recent version or update your Flash plugin.
Download audio file
Topic tags:
Elections, Arts/Culture, Class, LGBTQ, Music