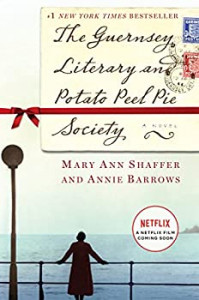 Host Ed Goldberg speaks with Annie Barrows, co-author of The Guernsey Literary and Potato Pie Society, a novel of love and intrigue on an island in the English Channel in 1946.

Mary Ann Shaffer became interested in Guernsey while visiting London in 1976. On a whim, she decided to fly to Guernsey but became stranded there when a thick fog descended and all boats and planes were forbidden to leave the island. As she waited for the fog to lift, warming herself by the heat of the hand-dryer in the men's restroom, she read all the books in the Guernsey airport bookstore, including Jersey under the Jack-Boot. Thus began her fascination with the German Occupation of the Channel Islands.

Many years later, when goaded by her book club to write a novel, Mary Ann naturally thought of Guernsey. She chose to write in the epistolary form because, "for some bizarre reason, I thought it would be easier." Several years of work yielded The Guernsey Literary and Potato Peel Pie Society, which was greeted with avid enthusiasm, first by her family, then by her writing group, and finally by publishers around the world. Sadly, Mary Ann's health began to decline shortly thereafter, and she asked her niece, Annie Barrows, to help her finish the book.

Mary Ann Shaffer was born in Martinsburg, West Virginia, in 1934. Her career included libraries, bookstores, and publishing, but her life-long dream was to "write a book that someone would like enough to publish." Though she did not live to see it, this dream has been realized in The Guernsey Literary and Potato Peel Pie Society.

Annie Barrows, whose career also included libraries, bookstores, and publishing, is the author of the

series for children, as well as