What is to be Done 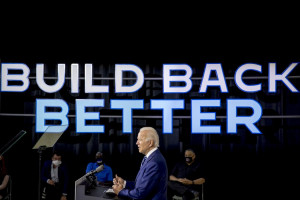 Bill Resnick speaks with David Dayen, the editor of the American Prospect, a bi-monthly magazine on U.S. Politics.  They discuss the many opportunities President-elect Biden will have through executive privilege to circumvent a Republican-controlled senate and the fiscal hawks of his own Democratic party, in order to put progressive measures in place. These could include, as examples, a civilian public health corps to test and track viruses, halting foreclosures, facilitating model zero-carbon cities, forcing law enforcement to track and prosecute violent neo-fascists, and much, much more. None of this will happen, however, in the absence of sustained pressure from the grassroots.