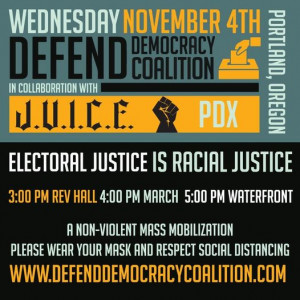 The day after the elections, groups around the country are mobilizing to respond to whatever attempts may be made to manipulate, curtail, nullify or otherwise interfere with the electoral and vote-counting process and to head off any attempt to remain in power if Trump is defeated at the ballot box.

In Portland, a wide coalition of groups has united under the banner "Defend Democracy Coalition" to show up in the streets as part of this collective national effort. They will be leading a march and rally on Wednesday, November 4, starting at Revolution Hall (SE Stark between 12th and 14th) at 3 p.m. Joining host Paul Roland to talk about the group and their goals and planned actions will be Maxine Fookson.

Fookson  is a lon- time social justice activist on issues of immigration rights, Palestinian justice, racial justice, and nuclear disarmament. In her professional life, she has been as a nurse and nurse practitioner. She is involved with American Friends Service Committee, OR Physicians for Social Responsibility, and nationally with the Jewish Voice for Peace Health Advisory Council.

The Coalition has this to say:

Join us to demand that every vote be counted, stand up for Black lives, and defend our democracy.

We voted in record numbers for racial justice. We voted for a fair economy. We voted for our climate. Now we are joining together across our differences to defend our democracy.

We have witnessed a strategic and sustained effort by the President and his political allies to suppress the vote and undermine our electoral process – all with the intention of illegally maintaining power and subverting the will of the people. We won’t let him divide us.

Already we are joining together across our differences to vote in record numbers, and, if necessary, we are prepared to take to the streets to defend our democracy.

Defend Democracy Coalition includes more than 50 community organizations in Portland and the Pacific Northwest, all working together at the intersection of electoral justice and racial justice to stand up for Black lives and protect the integrity of the 2020 election. We are collaborating locally with J.U.I.C.E., which fights to end systemic racism through Justice, Unity, Integrity, Community, and Equality. Our Nov. 4th event is one of hundreds around the country preparing to mobilize in the national Protect the Results coalition organized by Indivisible and Stand Up America.

A list of participating groups can be found here: https://www.defenddemocracycoalition.com/about

Update Required To play the media you will need to either update your browser to a recent version or update your Flash plugin.
Download audio file
Topic tags:
Activism, Elections, Movement for Racial Justice, Civil Rights/Human Rights, Community Building, Government/Politics