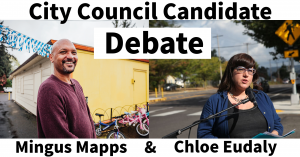 They are the incumbent, Chloe Eudaly, and her opponent, Mingus Mapps.

Mingus Mapps is a community organizer, who has worked as a program coordinator and supervisor for the city of Portland Crime Prevention Program, he is a professor, and has a Ph.D in government from Cornell University.

Check out the full debate video on our Facebook page here.