Masque of the Red Death by Edgar Allen Poe 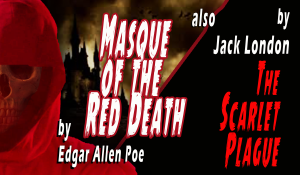 Fortunato returns to the air with a reading of the classic horror story that is more than relevant today. First published in 1842, and drawing on many conventions of Gothic fiction, Edgar Allen Poe tells the tale of Prince Prospero who figures to lock himself and his many courtisans within a fortified abby as a deadly plague, known as The Red Death, lays waste to the country side. As thousands die outside, the Prince decides to stage a elaborate masked ball. Also, a radio adaptation of the Jack London 1912 novel "The Scarlet Plague" from a 1954 presentation on the CBS series Escape.