Dawson Carr of the Portland Art Museum on Volcano! 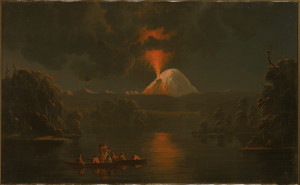 On Art Focus on Tuesday August 11, 2020, Joseph Gallivan interviews Dawson Carr of the Portland Art Museum about Volcano! the exhibit about the eruption of Mt. St Helens 40 years ago. Carr talks about the Romantic 19th century view of the volcano, then how the big blast of May 1980 was digested by local artists, and finally how the aftermath is being documented. The Portland Art Museum has reopened on a timed ticket basis and this show runs until Jan 3, 2021.

The Portland Art Museum proudly presents this tribute to Mount St. Helens on the fortieth anniversary of the eruptions of 1980. Spanning the period from 1845 to the present, this exhibition is the first survey of works of art inspired by the mountain. Although 175 years is barely a blip in geologic time, the art bears witness to an extraordinary era in the long, cyclical life of the volcano.

The beauty of Mount St. Helens has ranged from bucolic to savage. Before the eruptions, painters delighted in depicting its pleasing conical shape rising high above the verdant landscape. The 1980 eruptions challenged artists to capture the thrilling and terrifying displays of nature’s sublime power. When the smoke cleared, the new apocalyptic face of Mount St. Helens compelled the depiction of its haunting majesty. Since then, the rapid return of life to the mountain has captured the attention of photographers as well as scientists from many fields. Although the volcano seems to have reclaimed its serenity, some artists have begun to look to the future. Mount St. Helens will erupt again.

We are pleased to welcome you to this celebration of a great wonder on our horizon.

This show was recorded by Zoom videoconferencing software on Thursday July 23, 2020.