Stone & Sjursen: The Unbearable Violence of Being American - Ep 71 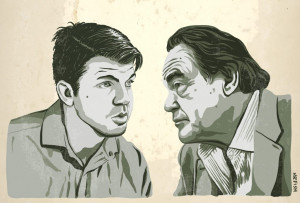 (click here to see the video version of this episode.)

America's military industrial complex and multiple presidential administrations have funnelled several generations of soldiers through unwinnable wars from Vietnam to Afghanistan and Iraq seemingly without qualms. What has emerged from these tragedies are thousands of traumatized young Americans bringing home wars and leaving behind millions of innocent civilians killed, wounded and forced to become refugees. But some of these former soldiers also came home with an urgent new perspective to share with their compatriots. That is the case of the two veterans on this week’s “Scheer Intelligence” episode: Oscar-winning film director Oliver Stone and journalist Maj. Danny Sjursen.

Although they served in the U.S. military with very different ranks and decades apart, the two share one important commonality: dissent. Before pursuing a career in film, that ultimately would win him many awards and accolades, despite often tackling controversial topics, Stone worked first on a U.S. Merchant Marine ship in 1966, and later joined the U.S. Army and requested to be sent into combat. Sjursen took another route, becoming  a military officer at the prestigious West Point Academy before being sent overseas for several tours in Iraq and Afghanistan and recently retiring after nearly two decades of service.

Stone’s new book, “Chasing the Light: Writing, Directing, and Surviving Platoon, Midnight Express, Scarface, Salvador, and the Movie Game” coming out soon, and Sjursen’s new book, “Patriotic Dissent: America in the Age of Endless War,” to be published in September, the two dissenters sat down with host Robert Scheer to discuss the concepts of patriotism and American exceptionalism in the context of their own life experiences as well as the film director’s career.

“When we talk about exceptionalism,” says the retired Army major, “through these terrible movies that are made post-9/11 about combat, it strikes me that perhaps your dedication to showing reality, to showing the brutality, is often misunderstood [by critics] as liking the violence or fetishization of violence when the reality is you hate violence so much. Perhaps you’re trying to demonstrate that through a refusal to whitewash it. Has that been an aspect for you throughout [your career]?”

“As I said in the book, it’s in me too,” responds Stone, reflecting on the violence he internalized while fighting in Vietnam. “There is an aspect of that ugliness in me. Charlie Sheen comes out of that war [in my film “Platoon” and] he says, ‘I’m the stepchild, the child of both [sergeants] Barnes and Elias.’ You take in the poison. You have to, to survive, I suppose. You can’t be an idealist in a war. You’re on site. It’s a very dirty situation.

“So I came home a darker strain of myself,” he concludes. “And I saw it in myself. So when I did these movies, I said, ‘Let it out, show it, man. Show it in all its ferocity, and let them fucking realize.’ That was what was misunderstood, and thank you for saying that. That’s been constant in my fucking life, just constant.”

Sjursen pins the conversation back to Stone’s book, which details the first four decades of the film director and screenwriter’s life, throughout the discussion, insightfully linking Stone’s many films, from “Platoon” to “Salvador” and “The Untold History of the United States,”  to the political events that not only shaped the two veteran’s lives, but also the America we all know and live in today.

Tying the two careers together, Scheer concludes, “Oliver Stone’s movies and Maj. Danny Sjursen’s writing are ultimately attempts to hold us accountable. For our apathy, our indifference. We send people like Oliver and Danny to war. We all do; we pay the taxes. Most people didn’t protest, most people think it’s just hunky-dory, right. And you guys witnessed evil by your own side.”

Listen to Stone, Sjursen and Scheer grapple with what it means to be American, the coronavirus pandemic, ongoing police brutality and the upcoming presidential election.

(This episode was a co-production of Scheer Intelligence and Fortress On A Hill.  To see the full credits and transcript at scheerpost.com, click here.)

Check out our t-shirt store on Spreadshirt.com

Not a contributor on Patreon? You're missing out on amazing bonus content! Sign up to be one of our patrons today! - www.patreon.com/fortressonahill

A special thanks to our Patreon honorary producers - Will Ahrens, Fahim Shirazee, James O'Barr, Adam Bellows, Eric Phillips, Paul Appell, Julie Dupris, Thomas Benson, Emma P, Janet Hanson, Lawrence Taylor, and the Statist Quo Podcast.  You all are the engine that helps us power the podcast.  Thank you so much!!!

Not up for something recurring like Patreon, but want to give a couple bucks?!  Visit Paypal.me/fortressonahill to contribute!!

Fortress On A Hill is hosted, written, and produced by Chris 'Henri' Henrikson, Danny Sjursen, and Keagan Miller.

Note: The views expressed in this podcast are those of the hosts alone, expressed in an unofficial capacity, and do not reflect the official policy or position of the Department of the Army, Department of Defense, or the U.S. government.

Update Required To play the media you will need to either update your browser to a recent version or update your Flash plugin.
Download audio file
Topic tags:
Civil Rights/Human Rights, Government/Politics, History, Law/Court/Crime, Military/Veterans, Police