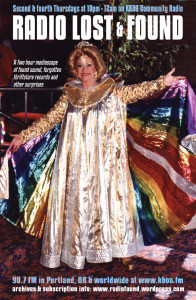 A new live episode of Radio Lost & Found, coming straight from my home studio and into your trembling earbulbs.

Crazy mixed up show. I was able to use everything in my studio to its fullest extent, stretching out with some multilayered mix. I also mixed in a live feed from Downtown Portland and the demonstrations there, courtesy of live Facebook streamer Sol Luna.  I also played some things centered around radio, as well as a part of a short 60s film about Community Radio activist/pioneer Lorenzo Milam, who had just passed away this week.  I played almost no new music and talked very little, letting my fingers on the faders do the talking. I should do more shows like this.

Update Required To play the media you will need to either update your browser to a recent version or update your Flash plugin.
Topic tags:
Music
Genre(s):
Eclectic, Electronic, Environment/Sound Art, Experimental, Live Performance, Punk, Rock and Roll, Spoken Arts