ACLU challenges the targeting of journalists and legal observers at protests 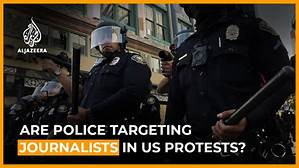 Across the United States, during the widespread protests against police violence and systemic racism against African Americans, there have been numerous incidents of journalists being targeted by police, including arrest, beatings, pepper spraying and more. This has also been true in Portland, where the protests have been particularly prolonged and intense. At the end of June, the American Civil Liberties Union of Oregon  and Braunhagey & Borden LLP filed a lawsuit against the City of Portland, the Portland Police Bureau, and other local law enforcement agencies working under PPB’s direction.

From a Jefferson Public Radio article:

The suit claims that police in Portland have tear-gassed, pepper-sprayed, beaten and arrested journalists, observers and other neutral bystanders who are documenting the police’s response to protests.“The police should not be shutting down the public’s access to the messages and realities of protest in Portland’s streets where people are calling for an end to police killing of Black people,” said Kelly Simon, interim legal director of the ACLU of Oregon in a statement.“Police in Portland are making a mockery of the First Amendment by targeting journalists, using excessive force, and by using indiscriminate crowd-control weapons. Police actions have had a chilling effect on the media and protesters.”

The lawsuit was filed in U.S. District Court in Portland and lays out multiple reports of violence against journalists at the hands of police.

More recently, U.S. District Judge Michael Simon agreed to allow attorneys for the Oregon ACLU to add the U.S. Department of Homeland Security and the U.S. Marshals Service as defendants in its lawsuit.

Today's guest, Katherine McDowell, is the ACLU of Oregon's Vice-President for policy and board member. In 2016, she helped organize the ACLU legal observer program, which she is still involved with, including during the current protests.

Update Required To play the media you will need to either update your browser to a recent version or update your Flash plugin.
Download audio file
Topic tags:
Activism, Movement for Racial Justice, Civil Liberties, Government/Politics, Media, Police

Jazz in the Afternoon
Jazz to be Thankful For

Life During Wartime
Soundtrack for the Peoples Uprising