The Lady Eve with Barbara Stanwyck 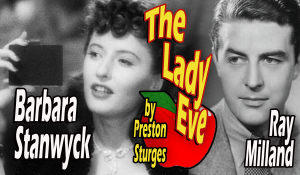 Tonight we present the radio adaptation of  what is considered the best romantic screwball comedy, Preston Sturges' The Lady Eve. Barbara Stanwyck, Ray Milland and Charles Coburn star in this Lux Radio Theater production based on Sturges' screenplay. Also, an episode of Suspense, entitled "Hey Man, Won't Somebody Dig Me", written and directed by William N. Robson in 1959. A cool beatnik poet is hitchhiking across the southwestern deserts, where he gets accused of being a multiple murderer,

Update Required To play the media you will need to either update your browser to a recent version or update your Flash plugin.
Topic tags:
Arts/Culture, Humor, Radio Theater
Genre(s):
Arts and Culture, Radio Theatre