Protests Across US Calling for Racial Justice: 5 Killed in Past Week 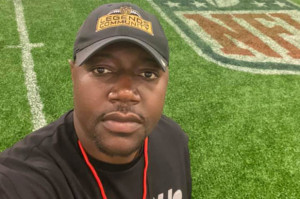 Across the country, protests continued last night, including in Portland, where thousands of people participated in a ‘die-in’ on the Burnside Bridge, and over 10,000 people gathered in Pioneer square to rally against police violence and racism toward black people in this country.

Police set up chain link fences across several streets in downtown Portland to prevent people from marching to the Justice Center, where prisoners are housed. After protesters managed to break into the Justice center Friday night, police feared they would return and try to free the hundreds of people imprisoned there.

At around 9:30 pm last night, police fired tear gas from behind the crowd, trapping hundreds of protesters in the block between the police and the chain link fence.

At 12:30 am, several police SUVs were filmed speeding through protesters, knocking several down.

Mayor Ted Wheeler said this morning that he will not extend the curfew through tonight, and that he wants to hear from the community about their concerns. He did not promise any changes to Portland police department policies, and did not revoke the seven million dollar increase in funding he is requesting for the police in this year’s budget.

In the past week of protests in the US, five people have been killed.

In Indianapolis on Saturday night, former University of Indiana football star Chris Beaty was killed by unknown assailants while participating in a Black Lives Matter protest. Beaty was known as a kind, community-focused man who had recently developed a type of washable, filtered facemask that he was distributing to people to stop the spread of the pandemic. Indianapolis has been the site of a number of recent police killings of black people, including a day earlier this May in which three people, including a pregnant woman, were killed by Indianapolis police.

In Louisville, Kentucky, the site of the fatal police shooting of Breonna Taylor in her home in March, someone fired into a crowd of protesters this past Thursday night, injuring at least seven people, one of them critically. Protests there continued through the weekend, and on Sunday night, Brian McAtee was shot and killed by police, who left his body on the street until noon on Monday. McAtee was the owner of YaYa’s BBQ, and was fatally shot outside his business. Louisville Mayor Greg Fischer fired police Chief Steve Conrad when he found out none of the officers involved had been wearing their body cams.

On Saturday night in Omaha Nebraska, 22-year old protester James Scurlock was shot and killed by a white bar owner in the city’s popular Old Market area. No charges were filed against the bar owner, Jake Gardner, as county prosecutors believed his claim that he shot the young man in self defense.

In St. Louis Missouri on Monday night, a retired police officer died while trying to stop looters from entering his friend’s pawn shop. David Dorn, a black man, had tried to address racial inequities in the St. Louis police force during his thirty years as an officer.

In Las Vegas Monday night, a man was killed by police during the protests. Police claim he was wearing body armor and appeared to be reaching for a weapon. In a separate incident Monday night in Las Vegas, an officer was shot in the head in front of the Circus Circus Hotel and Casino on the Vegas Strip. The officer is in critical condition. A 20-year old man has been arrested

At least four of the five people killed in the past week of protests have been black men. The race of the man killed in Las Vegas Monday night is unknown.

Confederate monuments and statues across the U.S. have been removed or defaced amid unrest over the killing of George Floyd in recent days, and in Virginia, the headquarters of the United Daughters of the Confederacy was set on fire.

Over ten thousand people have been arrested across the country in connection to the protests.

Trump tweeted that he would call out the military to put down protests – a move that would be a violation of the Posse Comitatus act and against the constitution.

According to the Washington Post, Defense Secretary Mark T. Esper said Wednesday that he does not support the use of active-duty military forces in quelling countrywide unrest at this time — a statement that puts him at odds with President Trump, who has threatened to send troops into U.S. cities.

The Chinese government called the US ‘ruthless’ for its response to the protests.

Meanwhile, the COVID19 pandemic continues to spread, with over six and half million cases worldwide – nearly two million of which are in the US. No coordinated plan has been laid out to allow for a safe reopening of the economy. Health officials say this kind of chaotic approach will lead to further spreading of the virus.

A detailed plan for reopening was written by Harvard scientists that would allow the country to be open SAFELY by early July at a cost of approximately $70 billion.

But that plan was not included in the latest four trillion dollar relief bill, which is now sitting in the US Senate after being passed by the House.

Update Required To play the media you will need to either update your browser to a recent version or update your Flash plugin.
Download audio file
Topic tags:
Movement for Racial Justice, Civil Rights/Human Rights, Race