The Night Run of the Overland 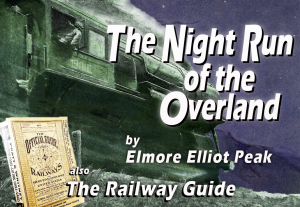 From the Golden Age of Railroad Fiction comes tonight's story "The Night Run Of The Overland" by Elmore Elliot Peake. With steam train engineer Fox laid up with a fever, it falls to his wife Sylvia, who has assited him on many trips in the cabin of the Overland Express, to take control of the mighty engine for a specail night run. A 3D radio production featuring Napales Yellow and Ambergine Plum. Also, a nostalgic look at America in the early years of the 20th Century by reading from "The Offical Guide of the Railway and Steam Navigation Lines of The United States, Canada, Mexico and Cuba".

Update Required To play the media you will need to either update your browser to a recent version or update your Flash plugin.
Topic tags:
Arts/Culture, Fiction, History, Radio Theater
Genre(s):
Arts and Culture, Radio Theatre