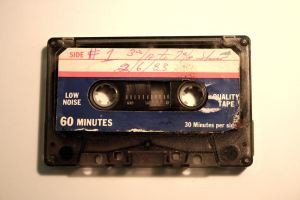 Richard returns to host this Covid times episode of A Different Nature, courtesy of Ferric recording tape. Tonight's episode features two cassette airchecks from Richard's tenure on the show from the early 80s.

First up:
An unmarked C-60 tape with an episode of ADN from 1982.
It starts off with Pauline Oliveros' 1982 album Music and Voice, which he back announces as being new, so I date this recording at 1982.
Richard makes mention of all the music being from his own collection and that there's little music like this in KBOO's library.
He also talks about the Thursday lineup of "New Music" after his show; poetry (Walt Curtis' Talking Earth; New Wave music with Stranger Than Fiction (the show that got me hooked on KBOO) and Barbara Bernstein's New Ear program.
This tape was completely unmarked and is presented here exactly as it is on tape with nothing edited out, other than blank audio.
Since it was a C-60 cassette, both sides are included in the file, with a brief moment of silence to indicate the end of side A.

Also, I played some Steve Reich to bring us up to the top of the hour.

Richard is actually guest-hosting on another programmer's show. Show consists mainly of the music of Michael Nyman.

These cassette came from Richard's personal tape collection and were distributed to various Different Nature collective members following his death.