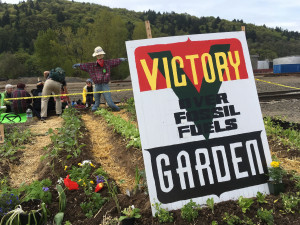 Climate change has not stopped for the pandemic—and the slowing of travel and commerce has given us only about a 5% reduction in global fossil fuel emissions—less than the reduction from the 2008 economic recession.

A precedent-setting case in the climate movement went to trial here in Portland in February.  The case involved the use of the necessity defense for five Extinction Rebellion activists who were charged with trespassing after occupying train tracks at the Zenith Energy terminal in Northwest Portland.  The action was in April 2019 and was intended to disrupt the operations of this local hub of fossil fuel transport that had recently expanded its capacity for transporting oil through Portland, including the highly toxic tar sands oil from Alberta Canada.  Jan Haaken talks with lead defense attorney Lauren Regan about the trial, the use of the necessity defense as a legal strategy in the climate movement, and lessons to be drawn during this period when direct actions are prohibited. Regan is an attorney with the Civil Liberties Defense Center in Eugene and has decades of experience defending activists in civil and criminal cases. This is an extended version of her conversation with Jan.

You can sign up at CLDC for the Civil Liberties Defense Center’s weekly webinars offering Know Your Rights trainings for climate activists.

You can learn more about the necessity defense by watching the documentary Necessity (a project involving a number of moles) free online for Earth Day 4/22/20.

END_OF_DOCUMENT_TOKEN_TO_BE_REPLACED

The Monday Sampler
Music and movie reviews for backyard listening