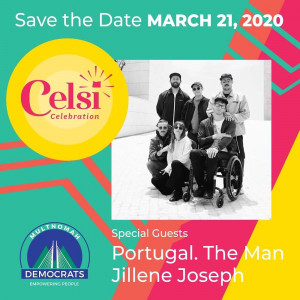 On today's program KBOO's News Director, Althea Billings and Public Affairs Director, Tammy Habteyes will be joined by Marc Koller co chair of the Celsi Celebration to discuss the Multnomah County Democrats efforts to get younger people involved with the organization.
We will also be joined by band members of Portugal.The Man to learn about their new foundation, PTM Foundation, which will be announced during the Celebration on March 21st.

Multnomah County has by far the largest number of registered voters of any county in Oregon: more than 530,000, which is almost 200,000 more than the next largest county. It's safe to say that  Multnomah County Democrats are responsible for Kate Brown's position as governor, and for the success of so many other statewide initiatives and candidates.

Indeed, Multnomah County Democrats is the organization around which this year's "get-out-the-vote" efforts will be the most effective in Oregon. One of their key initiatives right now is engaging non-affiliated voters in Multnomah County (so many people who think of themselves as "independent" are truly leaning in one direction).

Unlike the Democratic Party of Oregon, MCD does not receive funds from the national party. Instead, it depends upon fund-raising and local activists' donations. On Saturday, March 21st Multnomah County Democrats will host their annual Celsi Celebration. This year's event promises to be exciting, with special guests Portugal.The Man (which is announcing their new PTM Foundation supporting political engagement among indigenous people). Zia McCabe (aka DJ Rescue) will be spinning tunes at the afterparty. It should be so much fun! Former Governor Barbara Roberts is the honorary host of the event. Speakers include Senator Jeff Merkley, Governor Kate Brown, Representative Earl Blumenauer, County Chair Deborah Kafoury and other state and county officials. Jillene Joseph of the Native Wellness Foundation will deliver the keynote address.

Update Required To play the media you will need to either update your browser to a recent version or update your Flash plugin.
Download audio file
Topic tags:
Activism, Class, Community Building, Elders, Government/Politics, Indigenous