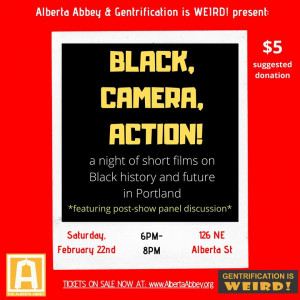 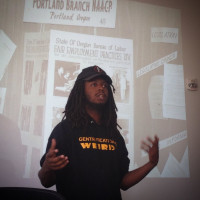 On Saturday, February 22nd, Gentrification is WEIRD and Alberta Abbey will be presenting a night of short films, entitled Black, Camera, Action! The short documentary films focus on the past, present and future of Black communities in Portland, and the event will also feature a panel discussion, as well as a Q&A with the community.

KBOO's Annette Newell and Althea Billings speak to the creator of the event, Gentrification is WEIRD's Donovan Smith, an award-winning journalist, founder of the clothing brand Ignorant/Reflections, a fourth generation Portland native and artist. We learn more about the individual films as well as the ways in which the various histories of the Black communities are intertwined and increasingly relevant to the future.

More information on Gentrification is WEIRD.

Update Required To play the media you will need to either update your browser to a recent version or update your Flash plugin.
Download audio file
Topic tags:
African American, Arts/Culture, Film, History

END_OF_DOCUMENT_TOKEN_TO_BE_REPLACED

The Dirtbag
Where garden plants come from