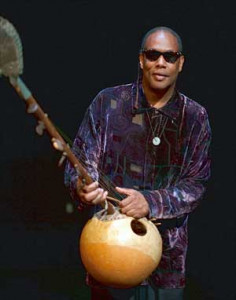 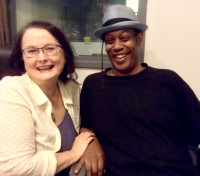 Dmae talks with pianist and composer David Ornette Cherry for an in-depth looks at his music and new collection of compositions for his upcoming new CD release. David has composed numerous CDs and produced evenings of his Organic Listening Club (coming in Oct!) as well as being the composer for Susan Banyas' The Hillboro Story. David more recently was the composer for Crossing East: Relations one-hour documentary special produced by Dmae. Hear the documentary for a limited time here.  Read more about David at: http://www.davidornettecherry.com/

Pianist and composer David Ornette Cherry, son of legendary jazz trumpeter Don Cherry, salutes his father's works along with new works of his own. The award-winning Cherry grew up in Watts, and his music is an artful combination of jazz,
classical, African, and world music. His noted collaborations include Don Cherry, Ed Blackwell, Charlie Haden, Billy Higgins, Dewey Redman, Phil Ranelin, and Justo Almario, Thara Memory, Glenn Moore, Carlton Jackson, Kamau Daaood, and the
Watts Prophet. David was born the same year Ornette Coleman and Don Cherry recorded their first album,  SOMETHIN ELSE. The ambient music streaming through his childhood was generated by the early collaborations of his dad, Don Cherry, with Coleman and the musicians who visited his parents' Mariposa Avenue home in Los Angeles. However, it was a wood-chopping accident one summer in Sweden that sealed David's musical fate as he was confined to music study and later performing with his Dad at the age of sixteen years old.

Upcoming Performances with performing artist and writer Susan Banyas on her work "The Hillsboro Story" :

West Hills Unitarian Universalist Fellowship   WHUUF
February 9th, 2020
10:30 AM  Sunday Worship Service
Discovering the Beloved Kaleidoscope Community
Susan Banyas will talk about the experience of returning to the memory place to discover an edgy, eye-opening history, and finding her own voice in a chorus of others. David Ornette Cherry, who composed music for The Hillsboro Story and No Strangers Here Today, the two theatre works woven into the book, will offer music and stories as well.

4-5:30 PM Performance
Outtakes
50-minute performance on the Sanctuary Stage, followed by a Talk-Back and light refreshments. Outtakes features excerpts and outtakes arranged from the BOOK. The movement monologues, with original music performed by jazz and world music composer, David Ornette Cherry, bring to life the story, the people, and the mission.

It Could Be Different- brings his keyboard and soundscape magic to a fresh range of grooves and compositions, featuring the multi-talented Cherry Family along with some of his collaborators in the jazz and world music scene.

It Ensemble for Improvisors - Live/Los Angeles - composed with the idea that all exist in a world of harmonies which mirror life evolving away from the chaotic (to the positive).

Organic Journey- marks the fifth and final CD in David Ornette Cherry's "Organic" series, recordings that have spliced together David's musical roots and the new branchings he continues to explore.

Organic Roots comprises an intricate musical rhizome, an offspring bred by recollection and innovation. The global rhizosphere in which these seeds germinated was warmed by light shining from his father Don Cherry, who created a true world music before the phrase existed.

Organic Groove is David Ornette Cherry's musical journey grounded in jazz seasoned with textures from far and near - touching a bit of the city, mood of the village and the world where spirit dominates the heartbeat.

Update Required To play the media you will need to either update your browser to a recent version or update your Flash plugin.
Download audio file
Topic tags:
African American, Arts/Culture
Genre(s):
Arts and Culture