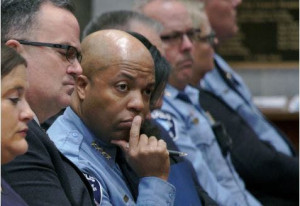 The meeting was open to the public, soliciting community response to the state of policing in Portland.

As the contract negotiations near, leaders of a national police reform campaign urged the Mayor and commissioner to push for reforms that would restrict the use of deadly force, hold officers accountable for misconduct and allow for greater civilian oversight. Activists from Black Lives Matter and Campaign Zero gave presentations at the invitation of Commissioner Hardesty.

Update Required To play the media you will need to either update your browser to a recent version or update your Flash plugin.
Download audio file
File(s):