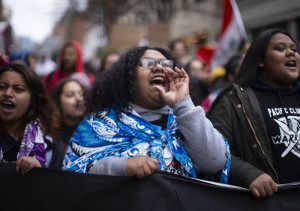 The march ended in a rally at Terry Shrunk Plaza led by the Pacific Warriors.

They chanted, "The seas are rising – so are we," and "We’re not drowning – we are fighting."

At the end of the rally, the youth handed a copy of their demands to Portland mayor Ted Wheeler. He did not speak, but was met with chants of ‘Now do something about it’ and ‘free transit for youth’ as he walked across the stage. KBOO was there and brings you sounds from the rally:

Update Required To play the media you will need to either update your browser to a recent version or update your Flash plugin.
Download audio file
Topic tags:
Activism, Asian Pacific American, Environment/Climate, Youth