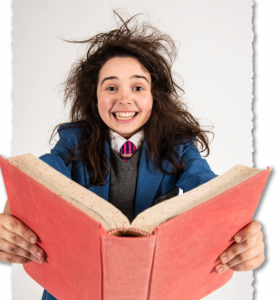 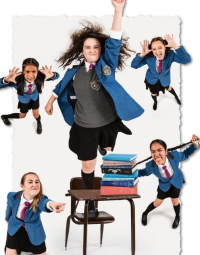 Based on the book by beloved children’s author Roald Dahl, the smash hit, Tony Award-winning, Matilda the Musical is a wildly funny, sometimes
heartbreaking, and always inspiring tale about the anarchy of childhood, the power of imagination, and a girl who won’t let being “little” stop her from putting an unjust world right.

NW Children's Theatre presents...
Matilda, the Musical, Based on the Book by Roald Dahl. Music & Lyrics by Tim Minchin, Book by Dennis Kelly

The Story: The young students of Crunchem Hall must deal with the child-hating, bully headmistress Miss Trunchbull (played by Portland comedian Kevin-Michael Moore), and in true Roald Dahl fashion the circumstances go from bad to worse. The situation becomes so dire that Matilda Wormwood (Ella Carson), an unassuming and brilliant bookworm, has no choice but to start a revolution.  Matilda becomes a superhero, and she inspires her classmates to stand up for themselves as they sing “Never again will she take away my freedom, and we won’t forget the day we fought for the right to be a little bit naughty.”

NWCT’s Matilda the Musical features an award-winning cast and creative team. Hardy, a recipient of Drammy and Portland Area Musical Theater (PAMTA) awards for outstanding direction (most recently for Mary Poppins) is back at the director’s helm. NWCT’s 2019-20 season offers sensory friendly performances for all productions this season, free of charge. Featuring shorter run times, no intermission, reduced or removed lighting and sound cues, and the constant presence of house lights, these performances are specially designed for children on the autism spectrum or with other sensory sensitivities. Each production also includes audio-described and American Sign Language interpreted performances.

Update Required To play the media you will need to either update your browser to a recent version or update your Flash plugin.
Download audio file
Topic tags:
Arts/Culture, Youth
Genre(s):
Arts and Culture

Pastures of Plenty
Welcome to April