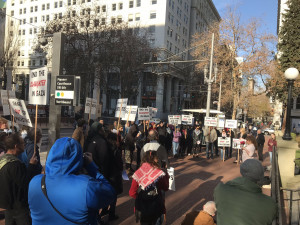 About a hundred Portlanders gathered Saturday for an emergency rally for Gaza.

This came after Secretary of State Mike Pompeo uprooted decades of U.S. policy, declaring that Israel should be allowed to violate international law by expanding colonial settlements on Palestinian land.

The Israeli military also bombed Gaza for three days over the past week, killing 43 Palestinians, most of whom were civilians not involved in any resistance activity.

Seven were children younger than 10.

KBOO’s Jenka Soderberg was at the rally, and brings us this report.

Update Required To play the media you will need to either update your browser to a recent version or update your Flash plugin.
Download audio file
Topic tags:
Activism, Global Affairs, War/Peace