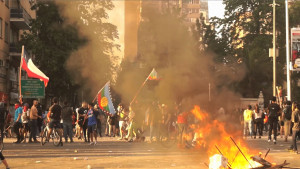 Civil unrest in Chile has continued for over a month now, originally in repsonse to a hike in subway fares. Now, the protests are widespread, centering on political and economic inequities experienced in Chile.

KBOO's Althea Billings spoke to Joshua Tucker, a freelance journalist in Chile who has been capturing the protests and those which came before producing a documentary called "Veins of Resistance."

Special thanks to Joshua Tucker for collaboration on this piece. Background audio, interviews and photos courtesy of Joshua Tucker.

Update Required To play the media you will need to either update your browser to a recent version or update your Flash plugin.
Download audio file
Topic tags:
Civil Rights/Human Rights, Activism, Global Affairs, Police