The Amazon & the Health of the Planet 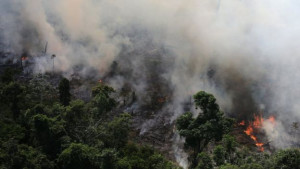 This year the world watched with alarm as the Amazon Rainforest burned. While news coverage of those fires has receded as attention shifts to the fires of impeachment, the Amazon is still burning. For many people around the world it is hard to fathom rainforests on fire, yet with accelerating climate chaos, tropical rainforests fires are becoming a common occurence. These fires are fanned by a lethal combination of deforestation followed by unsustainable industrial agricultural practices, decreased enforcement of forest law and the corporate and government-backed invasion of indigenous territories.

On this episode of Locus Focus we talk with three activists who are working to protect these critical ecosystems, upon which the health of the world depends.

María Teresa Quispe is the Managing Director of Wataniba, a non-profit focused on indigenous land rights as a way to addresseconomic inequality and deforestation in the Venezuelan Amazon.

Francisco (Pacho) Von Hildebrand is the Executive Director of GAIA Amazonas, a non-profit working with the indigenousnationalities of the southeastern Colombian Amazon on land rights, autonomous local governance, and preservation of traditional knowledge systems.

Matt Clark is the CEO of Nature and Culture International, a non-profit dedicated to conserving biological and cultural diversity inLatin America through the creation and management of protected areas.

Update Required To play the media you will need to either update your browser to a recent version or update your Flash plugin.
Download audio file
Topic tags:
Activism, Environment/Climate, Global Affairs, Indigenous

END_OF_DOCUMENT_TOKEN_TO_BE_REPLACED

The Last Hour
Hour Of The Dead (Metal TLH 1)