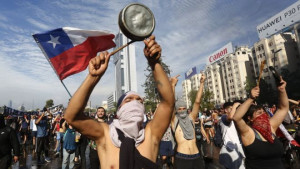 Since Friday, social unrest has been mounting in Chile, with millions nationwide protesting in the streets.

Last week, students started protesting fare hikes on the subway system, the second in two weeks. These demonstrations sparked more unrest, with unions across the country calling a general strike. Chilean economic inequality is significant, with little of the country's recent economic success benefitting the middle and lower classes.

The military has started curfews throughout the country, and the official death toll has reached 18.

President Pinera is considered by many to be out of touch, and his declaration of a state of emergency reminded many older Chileans of the years they spent under the dictatorship of Augusto Pinochet.

KBOO’s Althea Billings spoke with freelance journalist Josh Tucker, who is located in Chile, about the echoes of dictatorship, and the reasons motivating the demonstrations.

Update Required To play the media you will need to either update your browser to a recent version or update your Flash plugin.
Download audio file
Topic tags:
Activism, Civil Rights/Human Rights, Class, Global Affairs, Police