excerpts from "The Night Land" by William Hope Hodgson 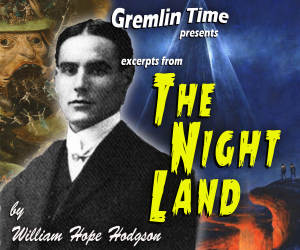 We wait all year to present a special kind of story in October. Tonight Fortunato will read some of the opening chapters to one of the greatest of horror novels, "The Night Land" by William Hope Hodgson. In a distant future the last of humanity is hold up in a great city within a giant pyramid know as the Great Redoubt. It is surrounds by a nightmarish country, filled with monsters waiting for their chance to finish off the last of humankind. Unpublished during his lifetime, Hodgson's epic would influence fantasy writers from H.P. Lovecraft, to Ray Bradbury and Stephen King.

Update Required To play the media you will need to either update your browser to a recent version or update your Flash plugin.
Topic tags:
Arts/Culture, Fiction, Radio Theater
Genre(s):
Arts and Culture, Radio Theatre, Spoken Arts