A tribute to Janice Gould 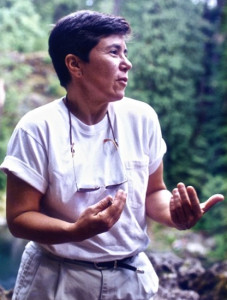 Janice was an American Indian of complicated genealogy, part Concow Maidu, a tribe whose territory was northern California, and part British, French, and Irish. Janice grappled early with issues of identity and self-worth. Like her mother, Janice had one foot in the sophisticated academic and cultural world of Berkeley, and the other, her spiritual foundation, in the stunning beauty of her ancestral land, and in the Indian culture she both experienced and researched. Gould’s themes are love, loneliness, longing for connection, family, history and place; her poetry is a journey of discovery, grounding and blossoming her own sexual, spiritual and artistic self.

THE GIRL I USED TO BE - Janice Gould

I was the girl who backed into life,

got lost, then disappeared again

under tables and in drawers,

on dusty pegs, among red lines

In Spring I watched waxwings sway

and found myself pushed north with them

on wet hillsides, and larkspur pokes

I was the girl who bucked hay, split wood,

tore the ragged face of earth with the harrow’s teeth,

who tried to toughen up in leather boots and haying chaps,

who disappeared in snow or rain,

beat her fists on windshields, but

survived by singing late into the night,

while everyone else was wasted.

I was the girl who seldom spoke,

into the startled dawn. I was the girl who,

enticed by stones, one day plunged into

from that brutal stream, terrified,

Janice Gould from “The Force of Gratitude,” Headmistress Press 2017

Janice Gould’s poetry has been published in over 60 journals and magazines. A musician as well as a poet, Janice played guitar and accordion, and helped to found Trio Pan Dulce, a Portland, Oregon-based group that played tangos, flamenco, French Café music, and Latin American Folk music.

Janice was an associate professor in Women’s and Ethnic Studies at the University of Colorado, Colorado Springs, where she developed and directed the concentration in Native American Studies. Her many awards include those from the National Endowment for the Arts, the Astraea Foundation for Lesbian Writers, the Pikes Peak Arts Council, and from the online publication Native Literatures: Generations. She earned a PhD in English at the University of New Mexico and an MLS from the University of Arizona,

The newest of her 5 books of poetry, "Seed", was published in 2019 by Headmistress Press, and her recently edited “A Generous Spirit: Selected Work by Beth Brant,” is forthcoming from Sinister Wisdom and Inanna Publications and Education Inc.

Update Required To play the media you will need to either update your browser to a recent version or update your Flash plugin.
Topic tags:
Arts/Culture, Poetry, Music
Genre(s):
Spoken Arts