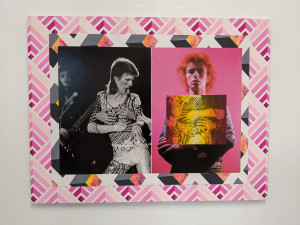 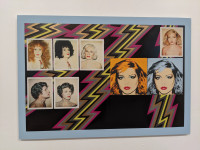 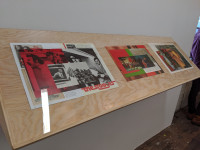 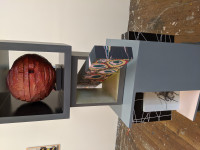 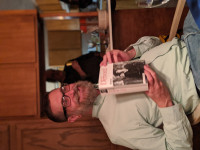 On Tuesday October 15, 2019 at 11:30 a.m. Joseph Gallivan interviews painters Mark Flores and William E Jones about their collaborative show called Perverted By Language, on now at Private Places studio until November 8. The L.A.-based artists talk about their painting and collage practices, the influence of new wave music, and what it’s like to collaborate for the first time after years of being a couple.

TRIGGER WARNING: THIS SHOW IS NAMED AFTER AN ALBUM BY THE FALL

Gallery Hours: Open by appointment while exhibitions are on view.

Email info@privateplaces.us to schedule your visit.

The artists Mark Flores and William E. Jones have lived together in Los Angeles for over twenty years, but they started collaborating only this year. Perverted by Language is their second two-person exhibition, and the first to feature works they have made together.

Flores, known primarily as a painter, recently began making hybrid objects—part painting, part sculpture. These constructions combine abstract with figurative painting, and draw inspiration from horror films, fabric designs, and Pre-Columbian art. He works at the Los Angeles Opera and has adapted materials and techniques from their productions to his art practice.

Jones, known primarily as a filmmaker, started out making collages as an undergraduate, and in the last few years has returned to the medium. His “gutter collages” juxtapose double page spreads from books, aligning all elements along the center fold, or gutter, and combine historical photographs with art reproductions and pornography.

The two artists collaborate by contributing alternate layers to a work: Jones providing photo spreads from his large book and magazine collection, Flores painting abstract patterns in vibrant colors coordinated with the images. In the works made for the exhibition at Private Places, their main references come from popular culture of the 1970s: David Bowie, Deborah Harry, Elton John, leather culture, punk, Bridget Riley, and Andy Warhol.

The show’s title is gratuitous, though it should be mentioned that William E. Jones is a fan of Mark E. Smith, who shouted for the mighty Fall, 1976-2017. “Snow on Easter Sunday / Jesus Christ in reverse / I tell ya, the Dutch are weeping / in four languages at least.” (Lines from the song “Tempo House” on the album Perverted by Language, released in the year 1983).

At Yale Union on Sunday, October 6th at 7pm, William E. Jones presents A Part of America Contained Therein, 2019, a selection of his films, in conjunction with this exhibition.

William E. Jones (born 1962 in Canton, Ohio) received a BA from Yale University and an MFA from California Institute of the Arts. His work has been exhibited at Museum of Contemporary Art, Los Angeles; St. Louis Art Museum; Museum of Modern Art, New York; Tate Modern, London; and Austrian Film Museum, Vienna. He has published many books and articles, and currently teaches at Art Center College of Design.