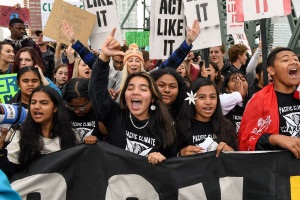 Portland middle and high school students left the classroom September 20th and took to the streets for a Global Climate Strike.

Portland student activists are aiming to raise awareness about the issue and call on city leaders to end fossil fuel burning and other forms of harmful human behavior impacting the climate.

Friday morning students arrived at City Hall at 10:30 a.m. and read a list of demands.

After the rally, participants walked to the East Bank Esplanade for a Climate Strike Festival.

Update Required To play the media you will need to either update your browser to a recent version or update your Flash plugin.
Download audio file
Topic tags:
Activism, Evening News, Youth