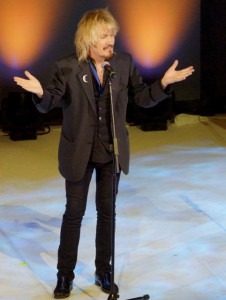 Welcome to the Autumn edition of The Holy Crowley Hour, the radio show for people who don’t own a radio.

Our special guest is the legendary audio theater producer, director, and writer Dirk Maggs. Dirk is perhaps best known for adapting the Hitchhikers Guide to the Galaxy novels for BBC radio, at the request of the author, Douglas Adams. He’s also written and directed “Audio movies”, as he calls them, based on the Superman, Batman, Spiderman, and Judge Dredd comic books. And he’s directed and produced radio adaptations of the Alien movies and The X Files TV show. Dirk has also dramatized and co-directed several Neil Gaiman works for audio, including Neverwhere, Stardust, and Anansi Boys, as well as Good Omens, based on the book Gaiman co-wrote with Terry Pratchett.

Dirk’s audio work has won awards in both the UK and US. To name just a few, the British Fantasy Society Award for Best Audio, the Audie Award for Excellence in Production, the BBC Audio Drama Award, the US Audiophile Golden Earphones Award, the US Publishers Association Audiobook of the Year,  the New York Festival Gold Medal Award, and the Mark Time Lifetime Achievement Award from our friends at The Firesign Theatre.

When it comes to audio theater, Dirk is a true master, and it’s a great honor to be speaking with him tonight.