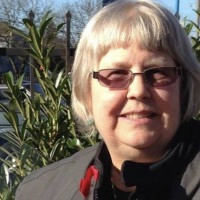 This show is dedicated to the late Sue Bartlett, whose life (which ended just a few weeks ago) was lived in much the way KBOO struggles to operate, as a community-minded enterprise and a community resource.  Moreover, before going online with Sue’s photo and this text, the show went on the air, roughly 21 hours after the moment of the autumnal equinox, which (here in the northwest corner of Oregon) was at 12:50 am on September 23, 2019, tipping us, as it does every year, toward the coming season of darkness.  Sue’s death became the most recent of several that’ve made an impact on poet and KBOO host Judith Arcana.  Death – which is always around, though we don’t always pay attention – has been pushing into her consciousness from several directions lately.  One result of that classic pushiness is this episode of “Poetry and Everything,” for which Judith is reading the work of six poets who died in the past decade:  Adrienne Rich 1929-2012; Derek Walcott 1930-2017; Lucille Clifton 1936-2010; Wanda Coleman 1946-2013; Janice Gould 1949-2019; and Tony Hoagland 1953-2018 (sets of poems are read in that order, the sequence of the poets’ birth years).

Update Required To play the media you will need to either update your browser to a recent version or update your Flash plugin.