Interview with Eyewitness at the Proud Boys Rally 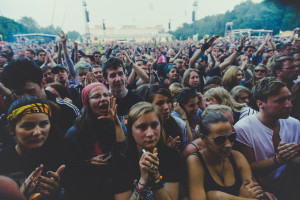 This past Saturday, far-right groups and anti-fascist counter-protesters met in Portland’s Tom McCall Waterfront Park in a much anticipated protest clash. The Proud boys, about 300 in total, were widely outnumbered by the over 1000 counter protestors. Police made 13 arrests for civil disturbance. The crowd control tactics, and lack of violence at the protest, were a point of pride for state and city officials. Billy J. Williams, the U-S Attorney for the District of Oregon, said of law enforcement at the protest, QUOTE “They do not and cannot take sides in a politically-charged public discourse. This weekend’s response effort was consistent with what I’ve observed throughout my career -- public servants working together to ensure public safety and help others, irrespective of politics.” For more on the story, KBOO’s Althea Billings spoke to Shawn Stevens, an eyewitness at the protest.

Update Required To play the media you will need to either update your browser to a recent version or update your Flash plugin.
Topic tags:
Activism, Civil Liberties, Civil Rights/Human Rights