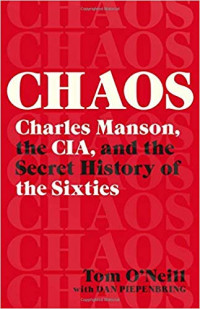 It may be the longest missed deadline in journalism history.

Assigned in 1999 to write a 30th-anniversary piece about Manson and the Tate-LaBianco murders for Premiere magazine, a then-popular newsstand film mag, Tom O'Neill finally delivered a book version this year – never having finished the article.

A diligent scrounger of file cabinets, unheard witnesses, court transcripts, and conflicting narratives, O'Neill, like a pop-culture Robert Caro, learned so many new facts as he did his reporting that he could not get to the end of the tunnel. The consequence isthat in Chaos: Charles Manson, the CIA, and the Secret History of the Sixties (Little, Brown, 528 pages, $30, ISBN 978-0316477550) he offers enough new material to completely rewrite history. Think you know the Manson case? The new details that O'Neill scored will blow your mind.

Engagingly written in the first person, and in the order in which O'Neill learned from scratch what happened at 10050 Cielo Drive and beyond (and before), the book takes the All the President's Men approach, the story of the writing of a story, also not unlike so many books and articles by Ron Rosenbaum. Thus the reader is as frustrated as the author when a detective for the Los Angeles County Sherif's office clams up just when O'Neill is on the verge of getting him to reveal that officials were ordered, Hands Off Manson.

The first time that I read anything alluding to some special circumstances around the Manson murders was, in of all places, Kenneth Anger's Hollywood Babylon, the Straight Arrow edition of the 1970s. Anger knew Bobby Beausoleil, and put him in a movie, but in the book, he hinted that Beausolieu and also Tex Watson were CIA plants, part of Operation Bad Ship Lollypop, designed to discredit the hippie left.

Mr. O'Neill's insights are not that far off from Anger's hints. Among the nuggets O'Neill unearthed from dusty file cabinets housed in L A County, from interviews with previously silent witnesses, and even prosecutor Vincent Bugliosi's own interview notes on yellow legal pads, include:

• Bugliosi may have made up the whole Helter Skelter race war motivation, in order to creat a narrative for his already-planned book.

• Bugliosi may have suborned perjury from record producer Terry Melcher, who had lived in the Tate house.

• Bugliosi was already writing the book during the court case; his ghostwriter Curt Gentry was there for the whole trial.

• In order to convict Manson of murder despite his non participation in the crimes, Bugliosi had to first assert that Manson controlled the Family; but in order to get death sentences for all for them during the penalty phase of the trial, he had to switch gears and prove that the men and women indeed had had "agency."

• Manson may have visited the Tate house hours after the slayings with a confederate in order to rearrange the scene, where, among other things, he left a pair of glasses on the floor. Neighbors heard shouting and arguing in the early morning hours, well after the events, butbefore the maid discovered the bodies. (If you read the book, you may wonder if the glasses once belonged to Alan Rose, a volunteeer at the Haight Street health clinic that the Family frequented, before luring in the hapless Rose to the Spawn ranch.)

• Various people whom Bugliosi didn't call as witnesses, or whom he examined only briefly, cast a wholly different narrative about Manson's role in the Hollywood music industry. Among them were the Beach Boy's Dennis Wilson, who with Melcher was a member of the Golden Penetrators, a trio of lads in sexual competition with each other.

• Melcher may have visited Manson several times in the months after the murders and before the family's arrest. Many people associated with the Beach Boys and the music industry quite simply knew that Manson was behind the murders.

• O'Neill introduces us to Reeve Whitson. A character out of James Ellroy's America Quartet, and a man of no visible means of support, who knew Sebring, Polanski, Tate's father, and, of all people, Curtis LeMay. People assumed that he was some kind of CIA operative, possibly associated with the Company's interest in drugs and LSD use.  Was Whitson a con man or a man who stared at goats?

• O'Neill also shows that there is evidence suggest that to the Tate murders may have been ordered in order to free Beausoleil from prison, proving that he couldn't have done an earlier murder. The word "Pig" was a "sign" that the Family had followed through on a promise.

One of the most fascinating portions of the book is O'Neill's eventual six hour interview with Roger Smith, Manson's ostensive San Francisco federal parole officer. Try as he might, O'Neill can't make him sound any different from an old geezer with a dim memory of the Summer of Love.

Chaos is above all an illustration of how someone otherwise rational and skeptical can slide down the conspiracy pole with such ease.  Familiar conspiratorial or researcher names come up, such as Mae Brussell, the late Paul Krassner, and others who see connections that squares laugh. Once the Venn diagram gets that large, and otherwise hidden connections buzz around your head like drones, the force of an alternative world seems obvious.  And also ... chaotic. It's telling that O'Neill eventually took on a co-writer.

In Once Upon a Time ... in Hollywood, Tarantino rewrites history, and in his way, so has Tom O’Neill.