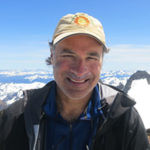 Ralph Nader points out the term climate change is a vast understatement and does not convey the gravity of what we are facing. He says, climate disruption is more accurate. Study after study, report after report make it clear that human activity is transforming our planet. With heat waves, droughts, wildfires, floods, melting ice sheets and rising sea levels, millions of people will be at risk. But the fossil-fuel industry with its insatiable hunger for profits continues its assault on the Earth. It has an ally in the president who claims to “have a natural instinct for science,” and asserts: “Any and all weather events are used by global warming hoaxsters to justify higher taxes.” Note that he asked for and obtained approval to build two sea barriers to protect his golf resort in Ireland from rising water.

Dahr Jamail is an award-winning independent journalist who went to Iraq to report on the war and occupation. He is the author of Beyond the Green Zone, The Will to Resist and The End of Ice: Bearing Witness and Finding Meaning in the Path of Climate Disruption. His articles appear in Truthout.

Movin' On
Movin On In Harmony

END_OF_DOCUMENT_TOKEN_TO_BE_REPLACED

Old Mole Variety Hour
The Afro-Atlantic Origins of the Banjo