The Journey of Lady Buddha 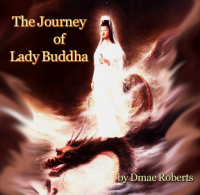 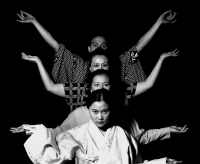 An excerpt of a personal documentary by Dmae Roberts

Dmae presents  a half-hour version of The Journey of Lady Buddha. The full-length piece originally produced in 1999 is a an hour-long personal and historical exploration of cultural conflicts in spirituality and the search for the Asian goddess of compassion and mercy, Kuan Yin, by Asian American radio producer Dmae Roberts, creator of the Peabody-award-winning “Mei Mei: A Daughter’s Song.” With readings by Actress Elaine Low, Giang Pham, Yuquin Wang and Ping Khaw-Sutherland and music by Composer Stephen Hoyt.

To hear the full-length documentary visit the store at MediaRites.org.  This documentary was adapted from Dmae's original stage play Lady Buddha.

In America very little is known about the mythology and the worship of Kuan Yin. Roberts’ mother was sold to work as a bonded servant in Taiwan and suffered abuse and starvation during World War Two. Throughout her life, Kuan Yin has offered her spiritual solace and strength to survive. Roberts called this figure Lady Buddha and in adulthood has tried to find out more about the stories that her mother could not communicate to her.

In this search, Roberts met Professor Chung-Fang Yu through a chance discovery and set up a correspondence via email. This piece is about discovering a puzzle piece to one’s culture and personal history, and about finding compassion for a religion one cannot embrace but can respect.

This was part of th eLEGACIES: FAITH, HOPE AND PEACE series which won the 1999 HEART OF AMERICA award given by the American Legion Auxillary for Best in Radio. The HEART OF AMERICA honors work that celebrates the contributions of American women and families. MediaRites was asked to present the award-winning series to the national convention in September 1999.

“It is exceptionally rare to hear a radio program of the quality, depth, and power of The Journey of Lady Buddha. After listening for a few minutes, I stopped what I was doing and simply sat and listened until the end of the program. What a rare jewel.”
Steve Roseman, San Francisco, California

Update Required To play the media you will need to either update your browser to a recent version or update your Flash plugin.
Download audio file
Topic tags:
Arts/Culture, Asian Pacific American, Women
Genre(s):
Arts and Culture