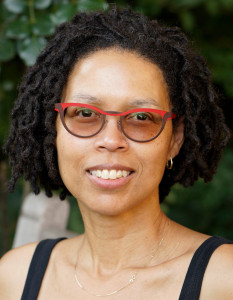 Evie Shockley is the author of semiautomatic(2017), winner of the Hurston/Wright Legacy Award and a finalist for the Pulitzer Prize and the LA TimesBook Prize.  She has published four other collections of poetry—including the new black (2011), which won the Hurston/Wright Legacy Award, and a critical study, Renegade Poetics: Black Aesthetics and Formal Innovation in African American Poetry(2011).  Her other honors include the 2015 Stephen Henderson Award for Outstanding Achievement in Poetry and the 2012 Holmes National Poetry Prize. She is spending 2018-2019 as a fellow at the Radcliffe Institute for Advanced Study at Harvard University.  Shockley is Professor of English at Rutgers University–New Brunswick.

Update Required To play the media you will need to either update your browser to a recent version or update your Flash plugin.
Topic tags:
Arts/Culture, Poetry
Genre(s):
Live Performance, Spoken Arts