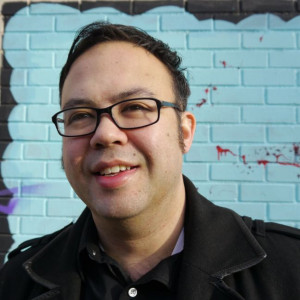 The Lit Fantastic is a KBOO podcast that features host Neil Aitken interviewing authors about their personal obessions. For APA Heritage Day on KBOO, we're featuring two interviews from the podcast. First we hear an interview with author Valynne Maetani, author of Ink and Ashes, who talks about her strange obsession with a particular kind of weird and gaudy fashion accessory and how it ultimately informs how she sees the world and what she thinks of how the world sees those who are a bit different. Then Lee Herrick, author of Scar and Flower,

Valynne E. Maetani grew up in Utah and obtained a Bachelor's degree from the University of Pennsylvania. In a former life, she was a project manager and developed educational software for children with learning disabilities. Currently, she is a full-time writer. She is a member of the We Need Diverse Books team and is dedicated to promoting diversity in children's literature because every child should grow up believing his or her story deserves to be told. Her debut novel, Ink and Ashes, is the winner of the New Visions Award 2013, a Junior Library Guild 2015 selection, and Best Fiction Book in Salt Lake City Weekly’s Best of Utah Arts Award for 2015. She lives in Salt Lake City.

Lee Herrick is the author of Gardening Secrets of the Dead (WordTech Editions, 2012) and This Many Miles from Desire (WordTech Editions, 2007) and a Fresno Poet Laureate emeritus (2017-2017). His poems have been published widely in literary magazines and anthologies.​ He is the founding editor of In the Grove and has guest edited various projects, including The Rio Grande Review and New Truths: Writing in the 21st Century by Korean Adoptees. He served for seven years on the Board of Directors of the English Council of California Two-Year Colleges and currently serves on the leadership team of The Adoption Museum Project. Lee has traveled throughout Latin America and Asia, and he has given readings throughout the United States. He was born in Daejeon, South Korea, adopted at ten months old, and raised in the East Bay and later, Central California. He lives with his daughter and wife in Fresno, California. He teaches at Fresno City College and in the low-residency MFA Program at Sierra Nevada College.

Neil Aitken is a poet, author, and founder of the De-Canon: A Visibility Project, a “pop-up library” and web resource project that will showcase literary art by writers/artists of color. Our goal is to put forth an alternative literary “canon” — or multiple canons — that are inclusive, diverse, and multi-storied in their approach to representation. De-Canon wishes to challenge existing ideas of what constitutes the North American literary canon, especially in our current culture.

Update Required To play the media you will need to either update your browser to a recent version or update your Flash plugin.
Download audio file
Topic tags:
Asian Pacific American, Arts/Culture, Poetry